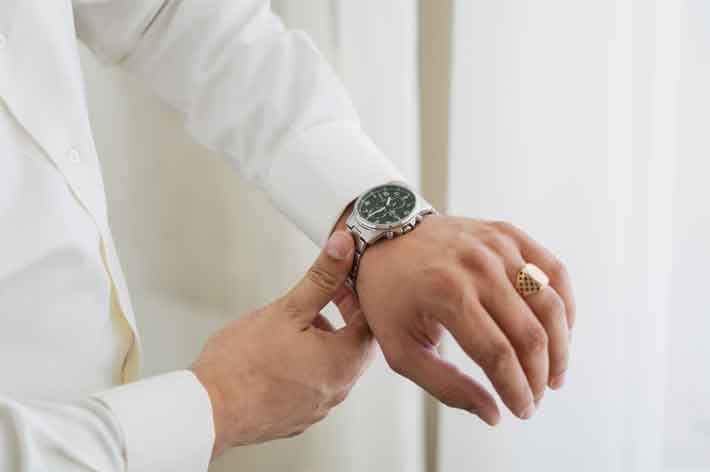 The Invicta Men’s Mechanical Skeleton Stainless Steel Alligator Watch was featured late last year on ShopNBC. I was fortunate to recently receive one as a birthday gift. At first, I thought this Invicta was a bit bright and shiny for a guy who typically prefers utilitarian titanium, stainless steel, and gunmetal tones. However, with rich gold tones and a genuine alligator skin band, this Invicta Men’s Mechanical Skeleton Watch has turned out to be the perfect dress watch for work. This watch regularly draws compliments from coworkers. As a skeleton watch, this Invicta has a front and back of shatterproof transparent crystal that allows wearers to see the internals at work. The generously-sized 44 millimeter case and thin watch hands make it easy to see everything going on within this wristwatch. I find it mesmerizing to stare at the intricate motions of the mechanical movement. The gentle ticking of this watch also has hypnotic qualities.

The Invicta Men’s Mechanical Skeleton Stainless Steel Alligator Watch has a gold-tone stainless steel bezel case with coin-edge detailing around the circumference. The internal mechanism is a rich mixture of gold and stainless steel metallic tones. As a purely mechanical wonder, this Invicta Skeleton watch must be wound up at least once every couple of days. However, the generously-sized crown makes winding easy. Since you can actually see the mainspring in the watch get tighter as you wind the watch, it’s easy to avoid over-winding. Personally, I prefer a manually-wound mechanical movement to a box full of watches with dead batteries. The hour and minute hands are thin and dark blue. The 9-1/2 inch U.S.-made band is genuine alligator skin in a deep natural brown color and is 21mm wide at the watch and narrows as it wraps around your wrist. The wristwatch itself is water resistant to 30 meters.

The watch is made by the Invicta Watch Group which is ably led by President, CEO, and third-generation watchmaker Eyal Lalo. According to wikipedia, Invicta was founded in 1837. However, the company was bought in 1991 by an American investment company and its headquarters was moved to Florida. Invicta watches are made around the world with watches being made in the Far East, the United States, and Switzerland. Invicta uses Swiss and Japanese movements and bought Technica Swiss Ebauche Microtenique in order to develop its own movements. The Invicta Men’s Mechanical Skeleton Stainless Steel Alligator Watch uses a Mechanical Technica Ebauche 2149649 movement. Like many people, I’m concerned about the movement of manufacturing jobs from the developed countries of the west to the Far East. However, the global economy makes this watch available at prices that are affordable to middle class consumers.

My quibbles with this Invicta Skeleton watch are pretty minor. As a big guy, this watch fits my wrist comfortably using the last hole on the band. A 10-inch band would allow me to feel a little more secure wearing this watch. I would also replace the gentle taper of this band with a band that remains of a constant 21mm or wider width. At times the narrow hands of this watch can make it difficult to quickly tell time at a glance. However, this skeleton watch is definitely more about fashion than function. The narrow hands of this Invicta allow wearers to look beyond the mere telling of time and ponder the deeper details of the mechanical movement. A quick survey of other skeleton watches available on the web reveals that watches with bolder numbers or broader hands reveal less of their innards.

Overall, the Invicta Men’s Mechanical Skeleton Stainless Steel Alligator Watch is a unique and constantly interesting wristwatch. I would not hesitate to purchase further Invicta watches or other similar watches in the future.