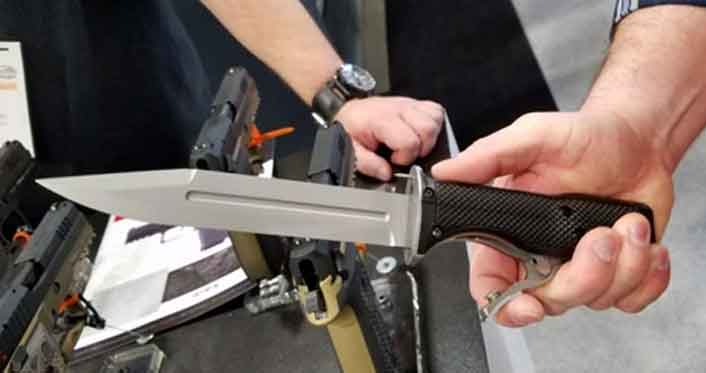 The Indy 1500 Gun and Knife Show is held five times a year at the Indiana State Fairgrounds, click over here. A typical Gun Show, it features both modern and antique firearms and edged weapons for sale. In addition, all sorts of related accessories, including military surplus, tactical gear, optics, and just about anything related to firearms can be found at the hundreds of table displays. The most recent Indy 1500 Gun Show was the weekend of January 9th, 10th and 11th. The cost of admission was $10, up $1 from last spring’s show. This increased fee was but a portent of what would be found inside the show itself.

My son and I arrived on Saturday right after noon. The parking lots were very close to full, and for the first time I had ever seen there was a line about 100 yards long waiting to enter. I had heard some friends previously discussing and cussing the rumors that the new Obama administration would soon endorse not only more restrictive gun control, but also push for an extremely high % of “user” taxes on both firearms and ammunition.

While the specter of more restrictive gun control has been debated for years, the thought of a new tax structure for firearms and ammunition seemed a real threat, and was taken seriously in discussions. Needless to say, the conversations my son and I overheard went into gory detail about the mayhem that new legislation and taxes could bring to the gun owner’s community in this country. Repeatedly we heard those around us stating that “This may be the last Gun Show” or “You better stock up on ammo now, it’ll cost you triple once Obama gets in” or even “Yea, the liberals are gonna ban anything that holds more than 5 rounds, and forget semi-automatic anything!”. Thus, the stage was set.

Once inside the gun show hall, one might say that pandemonium prevailed. Granted, the extreme size of crowd made it difficult to move about. The aisles between the display tables were barely wide enough to allow customers to stand at tables on both sides, and allow more than two people to pass each other in the center. And of course those families with strollers added to the crowed conditions. Allow me to blame the organizers for not providing more square footage, not the people themselves. Wonder what the Fire Marshall would have said.

Many patrons of the show were not, I might add, in the panic buying mode. Truly fine antique firearms were abundant, and specific niche collectors would have enjoyed the quality of the offered items. However, the activity surrounding the dealers fortunate enough to have AR15 type rifles and carbines can only be described as a feeding frenzy. (These are the semi-automatic version of the standard weapon carried by our military and law enforcement, incorrectly called “assault” rifles by some misinformed people.) We witnessed three sales of these in the time it took to weed our way through the crowd next to one dealer.

There were several others waiting rather impatiently for their chance to purchase. I talked with two other dealers who had sold out of AR’s already. Tactical type shotguns were also in short supply. (For those that know, I only saw one 870, and no 500 or 590’s.) Oh yes, the prices on the “evil black rifles” were at least $400 more than the same weapon at last summer’s show. $20 thirty-round clips were going for $30 and up, when you could find them. Ammunition was also running at least 20% higher than the last time I checked prices, which was sometime within the past six months.

These high prices were in no way a deterrent to those gun show patrons who had made up their minds that price be darned they were going to get that rifle before the new Obama reign took control of our 2nd Amendment rights. No, I did not interview any purchasers. But I heard their comments. Demand dictated price. Can’t blame the dealers. At least this niche segment of the economy seems to be booming instead of busting!

Perhaps my feeble attempt at economic evaluation is flawed. But I do know that my quick search on the internet revealed only the tag of “Out of Stock” on several dealers’ sites when I looked for AR type firearms. AR type rifles can’t be found available for immediate delivery. Maybe the dealers at gun shows have them all, jacking up the price $300 to $500, and selling them like the proverbial hotcakes. The near panics of some are driving up prices. As the ‘Monk’ TV show theme song says, “I may be wrong now, but I don’t think so”.