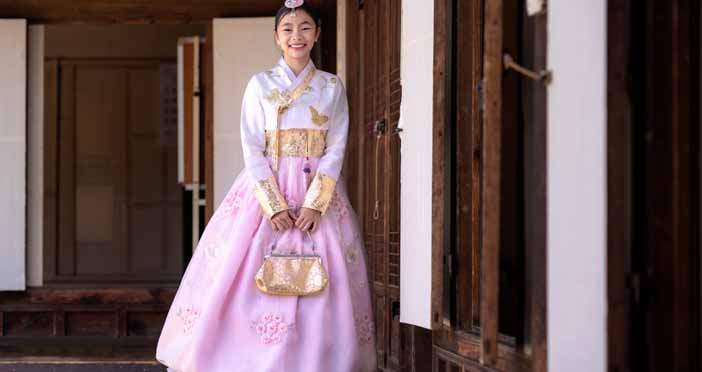 When do Koreans Wear Hanbok?

Asia is a very huge continent and consists of many races, religions, and cultures. All over Asia, we can find countries with different traditions and customs. They speak different languages and with huge diversity. Everything differs from their food to the dresses they wear. Different country has different traditional dress. In India they wear saris and salwar in China they wear cheongsam while in Korea they use hanbok. During any occasional functions, celebrations, and ceremonies this semi-formal or formal attire is used by the Korean people. In any type of culture, the color and style must meet the basic requirement of elegant, presentable, and feminine. The basic dress worn by the Korean people are just the same as other cultures would normally wear.

The special dress worn by the Korean women during their wedding is known as wedding Hanbok that includes a jeogori, which is a short jacket with long sleeves and it consists of two long ribbons that are tied to form the otgoreum. A chima is a full-length, high-waisted, wrap-around skirt. A Boat-shaped shoe, made of silk, is worn with white cotton socks. The bride’s attire mostly contains a white sash with significant symbols or flowers; a headpiece or crown may also be worn. The norigae is a hanbok decoration that has been worn by all classes of Korean women for centuries and it is tied to the skirt or the ribbon on the jacket. The knot on the top is called as Maedeup.

The Traditional Dress of Koreans:

Korean bride usually wears Hanbok on their wedding day. Hanbok is their traditional dress and it comprise of a wrap-around skirt and jackets. These types of dresses are colorful, loose, and consist of detailed straight lines and smooth curves. Nowadays, different styles of the Hanbok have been altered and modified to suit the taste and comfort of the youngsters. Hanbok consists of Baji, chima, po, Jokki, and magoja. There are two types of hanbok present; one is for men and another for women. The Hanbok for women consists of jeogori and a chima.

The jeogori is a blouse shirt or a jacket, and the chima, is a wrap that is worn around like a skirt. This chima comes in full length and both these attires are together called as chima jeogori. The Men’s hanbok consists of jeogori and baji. The jeogori is the same as the kind of women’s jeogori but the baji defers. Baji is the bottom part of the men’s wear. In the Korean language, it also represented as trousers. Po is known as over jacket while the Jokki and magoja is an outer jacket. This traditional dress is available not only for men and women even children love to wear this kind of traditional dress.

In those days the color of the hanbok determined the social status of the people. Common people mostly wore white cotton hanbok. Sometimes they are also allowed to wear pink, green, or grey color. But the upper-class people had many choices of colors. Noblemen and women wore colors in their hanbok. Children and young girls are allowed to wear bright colors while the older women wore more subdued shades.

The Unmarried woman wore a red skirt and yellow jacket, while the married women are allowed to wear green and red or blue after they had given birth to a son. And the patterns were tightly regulated to flowers or bats. The members of the royal family wore hanbok which gave a variety of meanings. Queens are allowed to wear images of phoenixes. Kings wore fire, dragons, mountains and the princess wore hanbok printed with butterflies, lotus flowers.