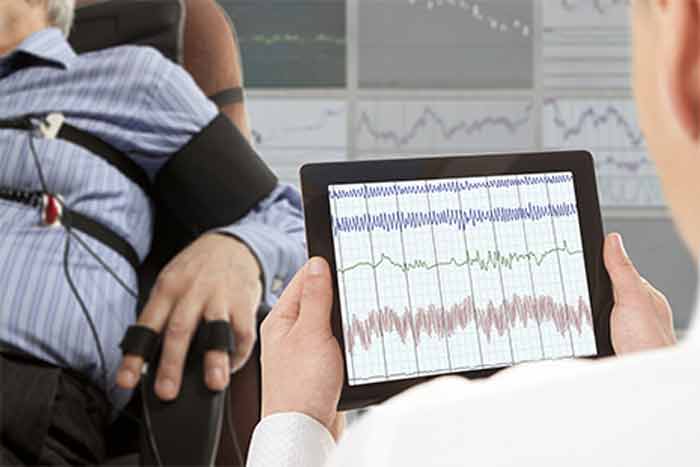 What is the Difference Between a Polygraph and a Lie Detector?

A polygraph and lie detector is the same concept but there is only one difference. Polygraph consists of some types of equipment such as two rubber tubes with the subject’s chest, blood pressure cuff, and galvanometer for measure sweating. These equipment are used to find out the body reactions and the abnormal symptoms from the body. The machine will be recording all of the body conditions. The work of two rubber tubes are filled with air. It will measure the tester’s breath level. It will be placed in the tester’s chest and abdomen. The breathing speed will be measured by these tubes. Then the blood pressure cuff is used to measure the pressure level of the tester. It is a normal cuff used in hospitals to measure blood pressure. When the replacement of the air the cuff will measure the blood pressure level. At lat the galvanometer is used to force more sweat. It will be placed in the tester’s fingertip. That is the place that encourages your sweat.

Truth about polygraph and lie detector

In polygraph testing the tester’s body will be controlled by the machine and every action of the body will be noted. While asking some particular questions the tester’s nervous system will be changed or show abnormal actions. With these changes the machine will monitor the truth. So this is the main concept of a polygraph. Lie detection is the process of verbal statement to find out the truth. The main intension of this lie detection is to find out the truth. Lie detection will find out the non-verbal truth from the tester. It is based on the questioning session for truth-finding. But in many countries they do not accept that lie detection is not give an effective record. The perfection of the truth is not reliable. So they use some technology such as a polygraph. The techniques will be monitoring the changes of a body.

The machine can detect the lie more than verbal questioning. The tactics used to win the polygraph is so effective. But the polygraph testing proofs the better evidence than the verbal testing. In lie detector there is no evidence to prove that is works well. So everyone go for a polygraph testing. In lie detection, the voice is not accurately produced and that is a major reason to quit these techniques. If the voice is clear then you can easily find out the truth with hearing the emotional answers such crying pr fearing voice. In polygraph there is no chance to detect voice because it measures only body actions. By measuring the body activities like pressure level and sweat level it will find the truth. Only the psychological changes will make the person reveal the truth from their heart. The interaction between the examiner and the examinee is the major part of lie detection. The examiner needs to note the examinee’s emotional reaction to the questions you asked for. There are three types of questioning strategies for polygraph and lie detection testing. That is all given here. The first is irrelevant questions. That means asking irrelevant questions may lead tester to ask the truth for an original question. This is the first step to finding truth in both polygraph and lie detection.

Secondly, comparison questions are the middle level of the truth-finding. While the examiner asking the question that related to the truth is the way for tester to reveal the truth. The final questioning type is a relevant question. After asking all of the irrelevant and comparison questions when the examiner asks a relevant question it leads the tester to reveal the truth. Get more info here liedetectortest.uk.