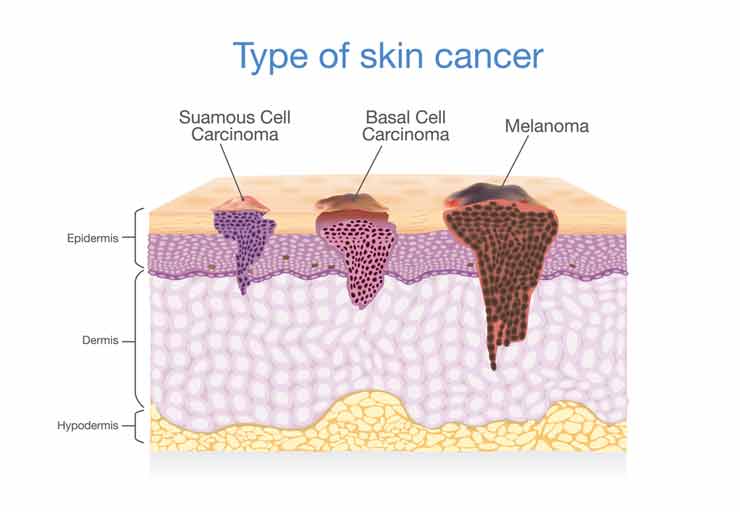 Basal and squamous cell carcinomas are the easiest types of skin cancer to treat if caught at an early stage of development. Early detection is made possible by the fact that symptoms present themselves on the skin, but you may not know what to look for resources. These types of cancer are extremely common and can be surgically removed in their early stages, avoiding any need for aggressive treatments. They can become dangerous if they form in body parts where they are not immediately visible, or if a patient who doesn’t recognize the warning signs fails to see a doctor before the cancer metastasizes. You can find skin cancer in less visible locations on your body by doing regular skin self-examinations, checking your skin for irregularities. Nonmelanoma skin cancer generally appears as a small red or flesh-colored lump or a rash or sore that doesn’t properly heal.

Melanoma is formed when melanocyte growths turn cancerous. Melanocytes give pigment to the skin, and are located between the dermis and epidermis. Moles, or nevi, are benign melanocyte growths. These are like cancer in that they are cells which reproduce too quickly or do not die when they should and form growths, but these growths will not metastasize, or spread to other parts of the body. Moles are very common and the average person has 10 to 40 of them throughout their body. Having an unusually high number of moles or having many moles which are dysplastic is a risk factor for skin cancer, and you need to watch for any new moles or changes in existing moles. Dysplastic nevi are moles which are irregularly shaped. Any change in the color, size, or shape of a mole, or any irritation of the surrounding skin, should be examined by a doctor, because this may be a melanoma.

Suspicious growths should be evaluated by a doctor, who may decide to do a biopsy. If it is convenient to do so, the doctor may remove the entire growth, possibly eliminating the need for any further treatment if the sample tests positive for cancer. If the cancer has progressed beyond the first stage of development, the patient may require topical radio, laser, or chemotherapy, and the surgical removal of local lymph nodes to prevent metastasis. If the tumor metastasizes, other skin cancer tumors may begin to form when cancerous cells separate from the original tumor and begin to grow in other parts of the body. It is extremely important to treat skin cancer, squamous cell or basal cell carcinoma, or melanoma, as early as possible to avoid metastasis.