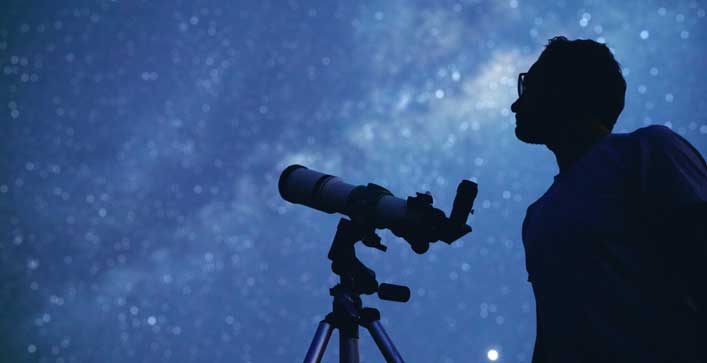 Astronomy How To: The Meade LX200GPS Schmidt-Cassegrain Telescope

The Meade LX200 line of telescopes is easy to use, accurate, and scientifically stable. These telescopes are available in aperture ranges from 8” to 16”. While the larger telescopes (12” or greater) are quite heavy and permanently mounting them is recommended, they all are equipped with sophisticated optics which are quality control tested before they are sold and shipped.

Reflector telescopes, those which contain a mirror to focus light, are normally cheaper when compared to aperture size of refractor telescopes. The telescope aperture is the diameter of the primary mirror or lens within the telescope. This determines their “light gathering” power, see more.

The reason reflectors are cheaper than refractors is that mirrors are much easier to build and are more constructively stable than large lenses. A standard 10” reflector can be purchased for about the same price as a quality 4” refracting telescope. Another advantage of reflecting telescopes over refracting telescopes is that they are better suited for viewing deep space objects such as nebula and galaxies.

Meade Telescopes produces a telescope line called the LX200. The most common of these telescopes is the LX200 GPS – meaning this particular telescope has a built-in GPS unit which is capable of detecting its location and automatically setting the internal clock time. The LX200 optical tube is mounted on a fork mount, allowing it to be pointed nearly anywhere in the sky. An equatorial “wedge” can also be purchased for the LX200 fork mount, allowing the telescope to be used for astrophotography purposes.

The LX200 Schmidt-Cassegrain telescopes are based on the reflector (or mirror) design – except these telescopes use a “corrector lens”, a primary mirror, and a secondary mirror to focus the light. This design basically “folds” the telescope making it much shorter and easier to transport. The 12” LX200’s tube length is only around 24” – making it easier to handle.

The LX200 is also capable of using standard D-cell batteries or the supplied power cord can be used and plugged into a standard 120 volt power supply.

The Meade LX200 GPS system is a wonderful addition by Meade. This unit has been installed in these telescopes for several years. From the beginner to serious amateur astronomer – this is a great function! When the telescope is “powered up” you can manually obtain a “GPS fix” or the telescope computer can be manually set to do this automatically each time you turn the telescope on.

There are several different styles of optics available for the LX200. The optics in the original LX200 was considered “standard” optics. When the LX200 GPS model was developed, two choices were available for mirror coatings – standard or Ultra-High Transmission Coatings (UHTC). The UHTC optics cost just a little more, but they added an extra 10% light-gathering power. Well worth the money spent.

Other optics styles are also available for the newer LX200 line of telescopes, including the Advanced Coma-Free (ACF) optics which provides a well balanced image throughout the entire field of view. This optical system works very well for those who rather use their telescope for astrophotography. The ACF line of mirrors allows stars or other celestial objects to focus nicely at the very edge of the field of view. Without the ACF optics, those objects normally have a “bent” or unaligned appearance. If you are primarily interested in astrophotography, you might want to look into Meade’s ACF line of LX200 telescopes.

The LX200 telescopes are mounted on a fork mount. A fork mount basically looks like a “two-prong” fork with the telescope tube mounted inside. A fork mounted telescope can point nearly anywhere in the sky – unlike the German Equatorial Mount. While quality German equatorial mounts are very stable, they must perform a Meridian Flip when the pointing reaches the zenith (the point of the sky that is directly above). This can be time consuming.

Some people will add many additions to their telescopes focal point such as focal reducers, Digital SLR cameras, CCD Imagers, and a number of other components. When using these on a fork mounted telescope, take caution of the clearance they have between the base of the fork mount and the telescope because impact can occur.

All styles of LX200 telescopes are equipped with an on-board computer system. The telescope is controlled with a “hand paddle” which contains the “brains” of the telescope. Thousands of pre-programmed targets, set-up options, custom programmable features, various tracking rates, and tons of other goodies are pre-installed in the hand paddle. The hand paddle even has a light and can even show you what the telescope temperature is. The LX200 can be completely controlled with this hand paddle, but for more options, the LX200 can also be easily connected to a personal computer.

Connecting a Camera or CCD to the Telescope

Professionally designed CCD imagers are also commonly used on LX200 telescopes. Many brands are available, but my experience in these cameras has been limited to the SBIG brand. These cameras are capable of “auto-guiding” via a cable connection from the camera to the telescope. This style of camera can auto-guide due to the fact that they actually have two CCD’s built into the camera body. One CCD monitors the tracking of the scope (making very fine adjustments to the telescope drive), while the other CCD is imaging your target.

From my own experience of using the Meade LX200 GPS telescope (which has been five years now), this is a great telescope. My personal LX200 GPS is the 12” model which, in my opinion,,is not too small or too large. I’ve never had any major issues with the telescope and it has provided me with thousands of images of planets, nebula, galaxies, stars, comets, and asteroids. If I ever decided to upgrade to a larger telescope, I would definitely purchase another Meade LX200 line of telescopes.